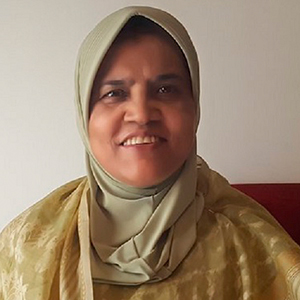 Affiliations & Activities: Member of FIGO Fistula Expert Advisory Group, Asian representative & past secretary general of International Society of Obstetric Fistula Surgeon (ISOFS), Chair of South Asian Group of Fistula and other morbidities, President of Obstetrics and Gynaecology Society of Bangladesh(2008-2010) and member of many national and international professional associations, Head of dept of OBGYN, Dhaka Medical college, SBMC,  MMC, MAGOMC, Prof of BSMMU, Focal point of Fistula program, Adolescent reproductive health, VAW of national society and program manager of Adolescent of GOB. She has dedicated her lifetime to eliminate obstetric fistula from Asia and the globe.

Books and Publications:  She has more than 50 national and international publications, Author/co-author of 4 books and wrote chapter in 2 books.

Since August 2017, around 700,000 Rohingya’s fled to Bangladesh to escape the brutal atrocity in Myanmar. Among these Rohingyas, women and girls are facing severe abuse, poor hygiene and sanitation practices, leading to acute health and psychological problems. The objective of the paper is to highlight specific social, psychological and reproductive health issues among women and girls, along with the challenges encountered by the host country. This paper reviews and analyse information available in website, country level reports, media reports and communication with partners working in Cox-Bazaar’s health facilities. Albeit the host community and their government welcomed Rohingyas to support on exemplary humanitarian ground, Rohingya women and girls are facing social, psychological and reproductive health problems by reasons of their experience of relentless violence in Myanmar. Even in the refugee camps they are vulnerable towards sexual and gender based violence by their own and host community youths, and health issues due to limited knowledge and available resources. Women/girls have no knowledge of hygiene practice, family planning, maternal health and reproductive health care. Yet, due to lack of care of their children in camp, mothers refuse to deliver or stay in hospitals. They also suffer from other obstetrics, sexual and reproductive health problems like PPH, PET, eclampsia, abortion, obstetric fistula, PID, UTI, AUB etc. The host government, local and international organisations created 150 new health cluster, 270 health facilities, along with many educational/counseling/awareness programs, however, it is still not adequate.